Orphaned at an early age, Augustus spent the majority of his childhood years on the streets as a petty criminal (and not a very good one). At the age of 13 he tried to break into a small temple of Pharasma and was caught red-handed by an elderly priestess, who took a liking to the boy and decided to raise him within the folds of Pharasma’s faith. An inattentive and somewhat vagrant boy, Augustus was indifferent to the teachings of Pharasma at first, and only stayed with the priestess to keep his belly full.

It was in his 15th year and as his discipline and attention wavered further that Augustus was noticed by a group of Inquisitors of Pharasma visiting the small temple – he was en-armored by the strange figures and followed these different looking “priests” around – they noticed the boys interest, and spoke to the elderly priestess about him. Learning of this past and his inattentive nature, they promised to educate the boy further by indoctrinating him into their fold, as soon Augustus was taken away for training.

Now in his 37th year, over 20 years of indoctrination and training as an Inquisitor has erased the vagrant boy of the past – now Augustus is a true follower of Pharasma, dedicated to preserving the faith through the laws set down by the Inquisiton Order. A veteran of countless battles within and without the fold of Pharasma’s church, Augustus now possesses the confidence and discipline of a man shaped by his experiences, with a resolve and determination that has seen his star rise far amongst the faithful.

Recently, Augustus met an untimely end at the hand of an evil Vampire named Radvir Giovanni. He was later returned to the Church of Pharasma in Caliphas where he was raised, and has once again returned to fight against the Whispering Way.

Bane (+2 / 2d6) (14 rounds/day) (Su) Make the weapon you are holding a bane weapon.
Detect Alignment (At will) (Sp) Detect chaos, evil, good, or law at will.
Discern Lies (11 rounds/day) (Sp) Discern Lies at will
Enfilading Fire +2 to ranged att vs a foe flanked by an ally with this feat.
Focused Mind +2 to Concentration checks
Healer’s Blessing (Su) Your cure spells are empowered for free.
Inquisitor Domain (Healing) Granted Powers: Your touch staves off pain and death, and your healing magic is particularly vital and potent.
Inspired by Greatness (Divine Favor) Whether you knew Professor Lorrimor well or only in passing, as a colleague or competitor, his career and lifetime of discovery inspired you to be better at what you do. As you honed your craft, you and the professor corresponded, and he was delighte
Monster Lore +3 (Ex) +3 to Knowledge checks when identifying the weaknessess of creatures.
Point-Blank Shot +1 to attack and damage rolls with ranged weapons at up to 30 feet.
Precise Shot You don’t get -4 to hit when shooting or throwing into melee.
Rapid Shot You get an extra attack with ranged weapons. Each attack is at -2.
Reach Spell You can cast a spell with a range of touch, close, or medium as one range category higher.
Rebuke Death (6/day) (Sp) Heal 1d4+5 damage to creatures at negative HP
Second Judgement (4/day) (Su) Variable bonuses increase as the combat continues.
Shake It Off Gain +1 to all saving throws per adjacent ally
Solo Tactics (Ex) Count Teamwork feats as if your allies had the same ones.
Stalwart (Ex) If you succeed at a Fort or Will save for reduced effect, you take none instead.
Target of Opportunity When an ally hits with a ranged attack, you may make an attack as an immediate action
Teamwork Feat (change 3/day) Swap your most recent Teamwork feat for another
Track +5 Add the listed bonus to survival checks made to track. 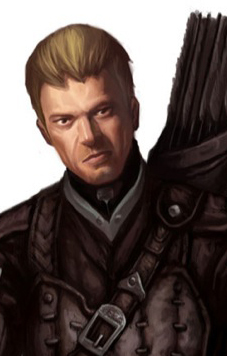